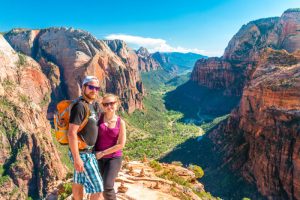 The brilliance of the pearly night sky full of bright stars, falling meteors, and swirling galaxies is a beautiful spectacle best experienced through stargazing. Watching the heavenly bodies under the pitch-black night sky, preferably in the arms of your beloved, is one of the simplest yet most romantic activities with your partner. There are countless great star-watching spots in the world, including the Americas. So grab your ESTA visa, and check out these picturesque stargazing places.

Mauna Kea is a dormant volcano in Hawaii and is the island state’s highest point of elevation. Measured from its base from the ocean floor to its summit, Mauna Kea is the highest mountain on Earth, significantly taller than Mount Everest.

Native Hawaiians considered Mauna Kea the home of Hawaiian gods, and it was so sacred that in the past, only spiritual leaders were allowed to ascend the summit. Now, the summit of Mauna Kea houses astronomical research activities and observatories. Book a guided tour and experience a unique affair.

Denali offers not only an enjoyable stargazing experience but will also let you witness one phenomenon only a few handfuls of places can see: the northern lights. The University of Alaska Geophysical Institute releases aurora borealis forecasts, so plan to get a better grasp of when to schedule your stargazing trip.

Bryce Canyon is known as the little cousin of the Grand Canyon, with its equally rocky terrain and grand spires, cliffs, and rock formations. And once darkness falls, revel under the jaw-dropping sights of the Milky Way and Andromeda galaxies, and countless other stars blanketing the sky. Camp overnight to make the most of your trip.

The deserts of New Mexico house the ruins of the native Chacoans that once inhabited the region. The historical park in New Mexico offers an unadulterated view of the night sky because of its meager amount of light pollution. Realize why olden tribes lent reverence and significance the heavenly bodies above us.

Due to urbanization, stargazing is slowly becoming obscure, and the number of places in the world where you can experience the full breadth of the night sky is dwindling. But fret not, for the United States has no shortage of scenic stargazing spots. Apply for an ESTA visa now, and visit the Americas for a mystical nighttime experience.